About the Treman Center

The Story of the Barn

The Barn was always a barn, but for nearly a century it stood desolate and abandoned in dense woods bordered by water hazards many, many miles away from its present location. It took a master builder and his wife nearly a decade to create what would become this sanctuary that is now The Treman Center. Here’s how it happened…

Kevin Reilly is one of the most well-respected stonemasons in New York state. For over 35 years he’s created award-winning homes, fountains, courtyards, and pools. He’s a “builder’s builder” with commissions and projects throughout the state. His wife, Leslie, is an award-winning artist who turned an extremely successful marketing and design career into one of environmental advocacy and ecological preservation.

In 2007, Kevin discovered a 19th century threshing barn in extreme decay, yet he was intrigued by its unusual architecture and “bones.” So, he did exactly what any true craftsman who strikes upon something like this does: he bought the property and amassed a team who then – with painstaking care – dismantled it plank by plank, stud by stud, nail by nail. He then loaded the entire disassembled structure onto four semi-trucks and moved the entire project some 10 miles away to the edge of Treman State Park, where he owned several acres. On this site, Kevin’s team spent the next year re-building the original barn. The result? A 6,000 square foot organically playful, agriculturally born marvel that merges mortise and tenon beam construction with 21st century sensibilities of green high-tech electricity, radiant heat, and airtight hyper-efficiency.

There was nothing else around like it, and while the couple initially envisioned it as a retirement compound for many generations of family, the barn’s sheer size and structure, and its instant popularity as a “destination,” immediately told them it had a greater purpose. Leslie had always planned to one day have a unique space for her community outreach and the various retreats and gatherings that she was already working with as a marketing and design professional. And then one day, she looked at this sprawling place, and a lightbulb went off. The Barn was the culmination of both of their lives, professionally and personally, and they had already built it.

Both knew they’d created something spectacular, where magical events could take place. It was such a massive endeavor for which more than 50 artisans had brought their unique skills, and the couple knew once they finally took a step back that The Barn itself was meant for something bigger. It needed to serve an entire community.

Watch a video about the making of the barn. 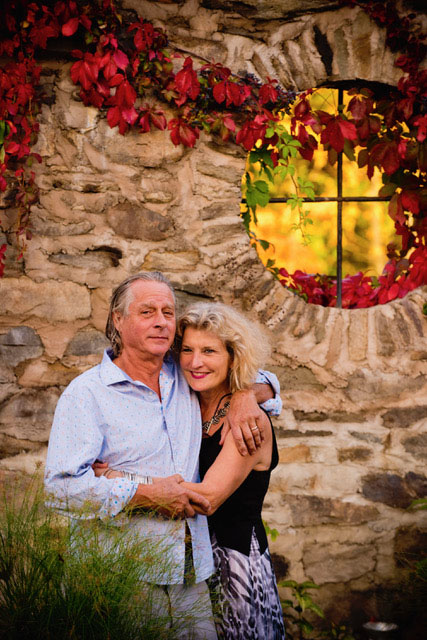 Kevin has been honored by many over the past 35 years for his high-end stone masonry and artistic endeavors. From fountains, grand fireplaces, courtyards, award winning houses, and pools, he leaves his unique style of “romancing the stone” wherever he goes. The Treman Center is a tribute to his craftsmanship, years of experience, and vision working with the finest craftsmen and women in the Finger Lakes region.

Leslie has 35 years’ experience in marketing, project development, public relations, and environmental education. Her education, graduate work in both the sciences and arts, and her commitment towards environmental and social change, has fostered her engagement in working collaboratively in partnerships with individuals and community groups on a local and global level. She co-founded the Restore the Earth Foundation, reforesting thousands of acres of Gulf Coast communities, before launching The Treman Center.

Together they have built a world-class center set in an agriculturally supportive environment. It serves as a creative space for innovation, bringing together the people and ideas necessary for a more sustainable future.